I have started this blog with a couple of insights into my life now, but realise that there is not much of a hint of who we are, who I am and how I came to be sharing this journey. 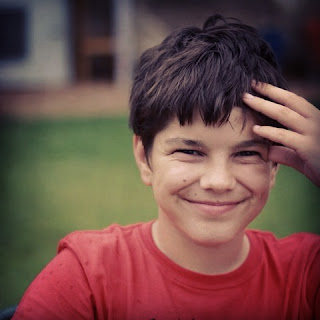 GI Joe is my oldest, he is turning 15. I was a young mum, not a lot older than he is now but when I found out we were pregnant, I was very excited. He was born into the world by a Cesarean as he was determined to be different from the start (breach). As much as I adored him, there was just something I could not put my finger on. I did think I would get the magical eye contact, the gazing down and looking longingly into his beautiful big eyes and that it would be instant love. GI Joe was having none of that, he wriggled away from my embraces, arched his back, screamed and looked everywhere but at me. The only time he would gaze longingly at anything was if it was shiny. I never forget my mother in law taking him to the doctor for me and commenting later that he stared for an hour straight at a door handle. He had reflux and on more than one occasion the pediatrician queried if I had post natal depression as he like me was not picking up on a lot of warmth between me and my little man. I loved him with every fibre of my being but  every time I got close to him he would cry.

Toddler-hood came and we had a happy little family of three, in our ugly little renovator. I desperately wanted  baby number two but it just wasn't happening. I was working in child care and GI Joe came to the centres that I worked in with me. Comments from other workers about his behaviour started, "He did the oddest thing today." "Do you think he needs to be assessed." Being in full denial at that point in time, I decided that I would put him into family day care. The issues continued there for a while, until we met the most patient lady in the world, Inga. Inga, I now know could see it all along. She knew it was Autism but she knew we didn't know and at that stage didn't want to know. She looked after him for a year and during that time baby T-Man came along......

We had no choice, we had to accept GI Joe was different to the other kids. He hated T-Man, wanted to kill him, hated me for changing his routine, hated me for bringing something noisy into the world.......

One day I went to playgroup, I was tired, trying to feed T-Man and it was pack up time. GI Joe lost it, the epic of all meltdowns. A lady named Kathy (with a non-verbal autistic boy) dealt with GI Joe while another lady (can't remember her name) came over. She looked up at Kathy and said, "It's time."

"Time for what?" I asked in tears. She sat there and told me how she had watched me, they had watched me struggle with GI Joe whilst doing all the right things as a parent. She told me that I needed to go now to the doctors and get a referral to have him assessed. She told me that she didn't care if I didn't like her any more, that someone had to tell me. I agreed that I was struggling and called the doctor there in front of her. I thought the doctor would dismiss me, our doctor we had since before GI Joe was born, he didn't, he was relieved. As GI Joe was still melting down while we were there, he became concerned and called our  pediatrician, who was also relieved and who got us in straight away. GI Joe destroyed the pediatrician's office! We were sent straight over to the developmental unit at the hospital, where he bit the developmental pediatrician and ripped down the curtains in the exam room. He was assessed, had an EEG and bloods, and a  speech pathologist and psychologist saw him on the day.

Two days later we got the call and the diagnosis...Autism.

There was all the usual emotions, ones you feel guilty about but there was also confirmation that I was a good mum and his dad was a good dad, we were good parents. We have had many tough times with GI Joe but he is a beautiful boy. He is in full denial of his Autism at the moment but I watched my beautiful cousin Miss Molly (http://missmollyandaspergers.blogspot.com.au/) go through the same and I know eventually, with support he will accept it. 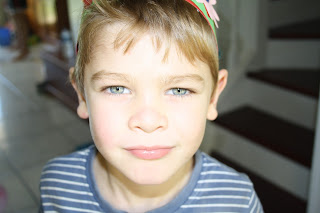 Well baby Yoshi's story is a lot shorter as he is only six. We picked up on his behaviour's fairly late in the game, he seemed to develop okay. Baby Yoshi has good speech (the best out of all our children) and was settled in a routine. The similarly to GI Joe a change of routine made us face that there were issues. Baby Yoshi is a lover not a fighter. Personal space is not something he has learnt. Neither is staying still. We started out with a diagnosis of ADHD but the enduring patterns of fixed routine, meltdowns in most social situations, and fixed interests (Mario Bros is the current obsession, hence the Baby Yoshi nickname) had my pediatrician querying Asperger's.  As I have a degree in Psychology the doctor was open to suggestions and my opinion. I waited some time and then called him and told him that I agreed and that I would like him assessed accordingly. The diagnosis was confirmed and we are doing the tough early years with him. I never understand the idea of early intervention stopping at six. I know we have a few more hard years ahead. 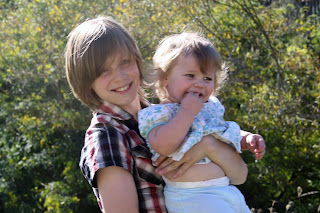 T-Man and Princess are not on the spectrum but they are worth mentioning. I think that job of being siblings in a special needs family is a hard one. T-Man has it particularly tough so sometimes his behaviour is harder to deal with than the other two boys put together. I am sure other parents have children with middle child syndrome, but I wonder if it is as bad when the other children don't have so many challenges. He is bright, engaging, and funny.

Princess was a lovely little surprise. All of the boys adore her. I have never seen any one bring GI Joe out of his shell like she does. I hope that continues, it is the most heartwarming thing to see. I think he knows she just loves him for who he is. She's picky about who she attaches to so I think that helps him feel special and loved.
Posted by Unknown at 2:07 PM