Once I received some constructive criticism from a college lecturer that I was incredibly proud of. I was so proud of this feedback I went and thanked her. She looked at me and shook her head and smiled. At the time I was confused about her response. The feedback was that I was too idealistic. The lecturer was my college lecturer for my child care course. My ideals were that children should be free to learn in an open ended environment. I wholeheartedly believed they should never be given restrictive activities such as colouring in and materials such as google eyes and technology was a big no-no (it was the 90s though).  This kind of idealism came crashing down when I had my own special needs children. The lesson that idealism can actually restrict children only occurred to me when I began homeschooling Lachie. It has taken me 17 years to figure out that my lecturer was not  in fact complimenting my idealism. 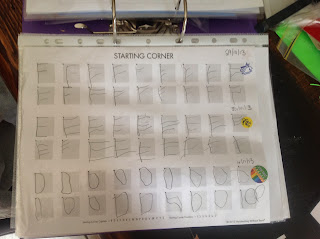 I recently decided to push aside my ideas about natural learning (gasp, shock, horror!) and do what just works. The result  can be seen in the photo adjacent. It doesn't look like much but it is HUGE, a massive effort from a boy who would not, could not, in his own mind possibly produce a whole page of writing. Even in this style I made some huge sacrifices in the name of letting go. There is no Queensland correct script, we are learning capitals only at this stage, and there is no pressure and no erasing during the lesson.

I see the parents of special needs children grasping at their remaining idealism all the time on the Internet. I see indignation over so many of the little things. I see arguments fiercely erupt (truth be told I have been involved) over whether children are Autistic or have Autism, whether it is a condition, disorder, disease, curable, preventable......etc. Maybe we should let go of these ideals and just do what works, it takes effort and trial and error to do what works but we sure as heck are not going to find out what that is if we sit around debating all day long.  I never forget an experienced mother telling a group of new mothers that no matter what they believed, read, or wanted, ultimately the child and not the parent guides the choices you make for your child. She then went on to advise them to throw away the baby books. I think we need to go a step further and engage in the world with an open mind.