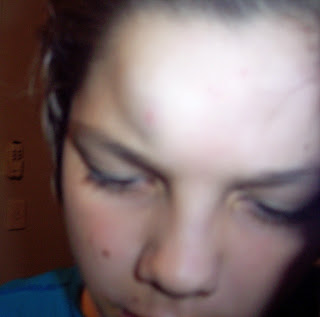 I am writing this and sharing this photo to take a stand against bullying. Gi Jo is too scared to make for himself. In 2010, when Gi Jo was in grade six he received this head injury courtesy of some boys who thought it was okay to smack him into the concrete because they believed that him bending over talking to ants was weird. Before this, they had been his friends. They justified this behaviour by saying they felt "betrayed" that Gi Jo did not inform them of his ASD and it was not until they saw him in the special ed unit that they realised. This started an ongoing series of taunts and social isolation. Most of it, I wasn't even aware of until recently, when GI Jo took a drastic measure to attempt to illustrate to his tormentors what he had attempted to express through his words. His behaviour became the focus and the consequences were that he now has become more socially isolated as a result because we feel that distance education is his safest option.

When I think of what happened my mind goes to stories in the media about other young kids that resort to violence and/or suicide to attempt to deal with bullying. I do not condone violence in any way and I am saddened that some young people take their lives rather than feeling that adults can help them. However, that is exactly the point that I am making. These young people become so desperate that they act in these ways. I  can not help thinking that teachers are too caught up with paperwork, process, and stress and parents in maintaining their lifestyles and dealing with other external pressures that the unspoken cues are missed. I could forgive that, I can forgive ourselves for missing the unspoken cues with GI Jo. What I can't forgive is the ignorance of the possible outcomes. We warned both schools at various times when certain behaviour from the other young people was coming to our attention. I have the above photograph as I was forced to email it to the school to demonstrate how serious it was that no one contacted us or supported our family and our boy through this. I had to threaten to make a police complaint for it to be taken seriously, even then the school never followed through on their promised conference with the boys involved.

People becoming teaching professionals often ask me how to prepare for having children with ASD in their classes. This is what I now say: Watch closely for the bullying, don't ignore it, watch for unspoken cues that indicate there is a problem with peers, listen to the parents of the child, act before it is too late.
Posted by Unknown at 7:00 PM