So school has not worked for both of my boys. This is not surprising considering developmental level and social functioning issues that come hand in hand with ASD. We have taken a leap of faith and put GI Jo into Distance Ed and Baby Yoshi is doing registered home schooling. I have been amazed at how many people choose this option. I had never really considered it before but so far it is working out okay. I won't say that there aren't challenges but I will say that I am willing to tackle them face on as their mother. I am fortunate in that my friends and family have been wonderfully supportive. I have met many people over the past few weeks and have received advice to ignore the negative comments. I have not had to endure any, even our pediatrician is supportive. So expect to see lots of record keeping disguised as blog posts here from now on!

Here is an example of our typical day, I have decided to use Lachie's (Baby Yoshi) and Aria's name, it's just easier. 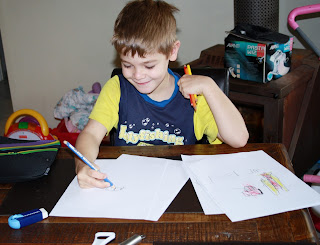 Today Lachie chose to practice the letter K. Lachie has good English skills but his writing can let him down.  Lachie worked hard on the worksheet provided but was motivated to commence his theme piece for English.  Lachie chose to recreate No-Bot the Robot.  Bernard the Robot lost his bottom so we talked about what would happen if he lost other body parts.  Lachie was able to tell me that if he lost his arms he could not touch and seemed to understand that we can use our body to communicate.  Lachie told me that ants communicate with their antennae.  Lachie is still mixing up “D” and “B” even when it is spoken and then he is supported to spell a word with either of those letters in it.

We used our new whiteboard today and even though he liked it, there were some tears when Aria rubbed off the schedule. 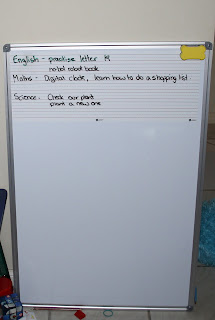 Lachie was difficult to engage with maths today.  Although the activity was guided by his robot interest, he was very active and left me when I was cutting out the robot.  He did engage in a game afterwards but was not really settled for the rest of the day.

Lachie participated in a science experiment.  He checked the growth of his previous plant that we re-grew using celery and he enjoyed the planting of the parsley and was able to connect it with last week’s library book, Pearl Barley and Charlie Parsley.  I lost Lachie’s attention when the steps were too long for him to write. The day ended with Reading Eggs and quiet television.  Although there were difficulties, he still managed to get the work done.

Considerations:
Park play is very important to Lachie and he does not understand the concept of a rainy day.  Weather visual and discussions around flexibility may help.    Lachie was unhappy that the routine changed from last Monday to this Monday.